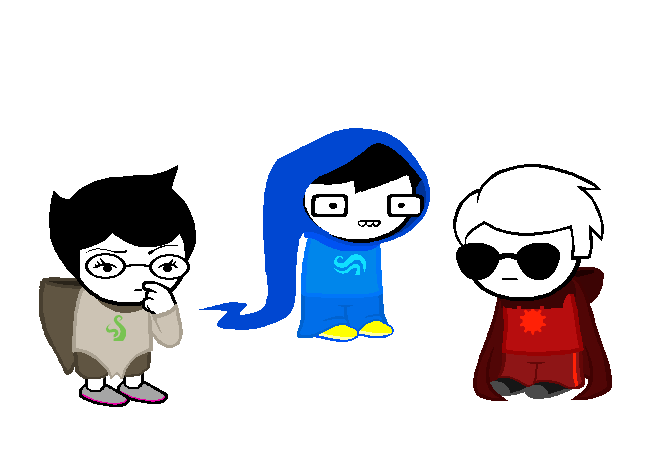 JANE: Maybe this is the wrong kind of question to ask but...
JANE: Where are we?
JOHN: oh right i don't think either of you have been outside before.
DAVE: so mean
JOHN: no no, not that kind of outside. this is outside of like... you know... the real world.
DAVE: still mean
JOHN: okay imagine a song.
JOHN: and that song is like, our world.
JOHN: and the melody moves from note to note!
JOHN: the difference... between the notes in the melody is like... that's us?
JOHN: and the difference between those notes are influenced by the key the song is in.
JOHN: and then imagine you take the keys away. but you keep the notes.
JOHN: augh.
JOHN: i'm explaining it poorly.
JANE: I see...
JOHN: you do???
JANE: So we're like notes, except we're also not.
JANE: I suddenly don't understand anything.
JANE: And I'm currently casting sincere doubt on the insinuation that I, or anyone else ever actually did!
DAVE: dont be such a damn noob
DAVE: its all so obvious
JANE: Then *please* explain it to me, Strider.
DAVE: its real simple
DAVE: mother
DAVE: fucking
DAVE:
DAVE:
DAVE:
JOHN: ...
JANE: ...
DAVE: shenanigans
JANE: ...
JANE: Okay thank you.

JOHN: okay i think i have an explanation that will sate you.
JOHN: it's like...
JOHN: backstage, but for real life.
JANE: That makes a bit more sense but still...
JANE: I don't even think I know what THAT means.
JOHN: i don't know.
DAVE: we still exist right
JOHN: yes.
JOHN: we still totally exist, dave.
DAVE: okay cool
DAVE: i havent felt existy in a while but its good to hear
JOHN: there's things i don't want to screw with.
JOHN: if handled recklessly it'll nullify the basic ability of anyone with a brain to give a shit.
JOHN: i don't like thinking about it to be honest.
JOHN: hopefully when we're done here i won't have to!
JOHN: i need to go pick up everyone else. will you all be good here?
JOHN: i didn't leave you much to do while i pick them up but it should only be a minute or two, at most.
DAVE: yeah im good
> ==>
Start over | Go back Settings [ Toggle GIFs | Toggle warnings ] | Game data [ Load game | Save game | Delete game data ]